Things have been crazy busy here in the shop so it’s been tough to get another post up, but I have squeezed out a few minutes for a quick update!

Yes, it’s true…I did just finish hand feeding 10,000 books on the old C&P! Got up to 1000 an hour and my arms felt like I swam the English Channel, but you got to get it done! I actually started out using the foot treadle but after about 700 forms it felt like I had run 100 miles up hill…so I put on the ol’ thinking cap and took a motor, belt and speed drive of my old Kluge and re-wired it onto the C&P and put it under power to get ‘er done!

I know a lot of you are lining up for classes and I  promise to get some going soon. But as most of you know that I run the shop by myself so when the work hits hard I get quite busy and it’s tough to schedule classes.

But I will have a new class schedule up soon!!!

Some cool things on the horizon as well…

I’ll be participating in this years Y Conference. I’ll be doing a ‘Thinkshop’ on all things letterpress, print, foil, embossing. How to design for the medium and sharing stories of the craft, I’ll even be bringing in a small tabletop press so everyone can get a feel for it.

Things have been moving out of the store pretty well….shipping to Ireland, Australia and all points in between!

I’ve been playing for as long as I’ve been printing and have had quite a bit if success doing it as well.

I’ve toured the States as well as Europe as a support act for the ‘Stray Cats’ farewell tour of Europe in ’08 and also play locally with my band ‘The Rockin’ Aces every Thursday night at Tio Leo’s in Bay Park (8pm no cover!)…you never know who will show up to sit in so it’s always a blast.

I’m also a member of Sha Na Na…yes the Sha Na Na of Woodstock (the original) and also the movie Grease as well as a long running T.V. show in the 70’s.

Here is a pic of me and Marvin Hamlisch. Over New Years Eve Sha Na Na did 3 shows with the Milwaukee Symphony Orchestra and he was the conductor. He’s a great guy, super funny and easy going…kind of surreal as I was onstage playing ‘La Bamba’ with him standing next to me hitting a cowbell! 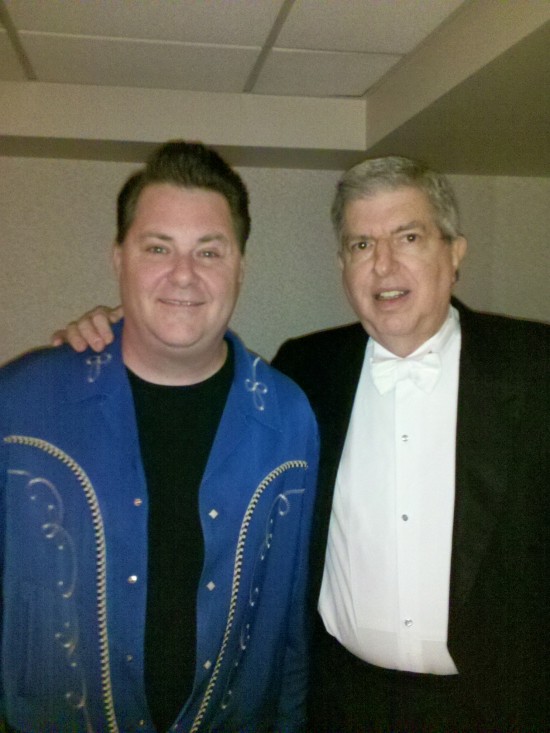 So there you go…a quick update

We do Letterpress and we do so much more…foil, embossing, die-cutting and we do it all here. We offer affordable prices and we’re easy to deal with…what more could you ask for?